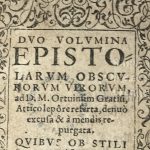 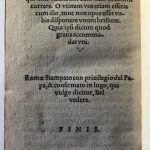 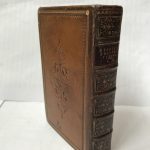 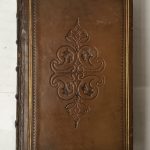 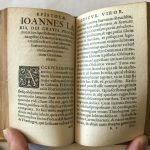 12mo, ff. [252], A-X12. Two volumes in one. Roman letter. First title within floriated borders, second on K5r with no borders, no imprint (fake place of publication on last) and a short poem exhorting the reader to forget about sadness and grief, and laugh at everything. Two woodcut initials, one for each volume at the beginning of the text. Title page slightly soiled, marginal yellowing. Marbled pastedowns, bookplate of the Harvard College Library (“the Gift of Mary Bryant Brandegee in Memory of William Fletcher Weld”) to front pastedown. T-p and first leaf with blind letterpress of the Harvard University Library. In late 19th-century gilt-ruled calf with embossed diamond-shaped floral decoration at centre, title on red morocco label to gilt spine, inner dentelles, a.e.g.

This is a pocket reprint of the Letters of Obscure Men, a famous collection of satirical letters in Latin, which appeared between 1515–1519 in Hagenau, Germany. This collection was soon forbidden by the Church, as one of these letters supported the humanist Johann Reuchlin. Furthermore, the letters targeted doctrines and habits of scholastics and monks. The authors of this epistolar books pretended to be Christian fanatics discussing whether all Jewish books should be burned as un-Christian, or not. Although fictional, this work had been inspired by a real dispute held in public between Reuchlin and some Dominican monks. The dispute converged on the case of a formerly Jewish convert who had obtained Imperial authority to burn all known copies of the Talmud in 1509.

The present letters are written in a deliberately bad Latin. Most of these letters are addressed to the German scholar and theologian Ortwin and contain accusations against him. The collection was published anonymously, and the authorship has been a fertile subject of controversy, but the main portion of the letters are attributed to the humanists Joahnn Crotus, Ulrich von Hutten, Erasmus, and Reuchlin. The work is credited with hastening the Protestant Reformation.